Brainspotting was developed through David Grand’s work with survivors of trauma, and many mental health professionals utilizing the approach have found it to be an effective form of treatment for a variety of mental health concerns. 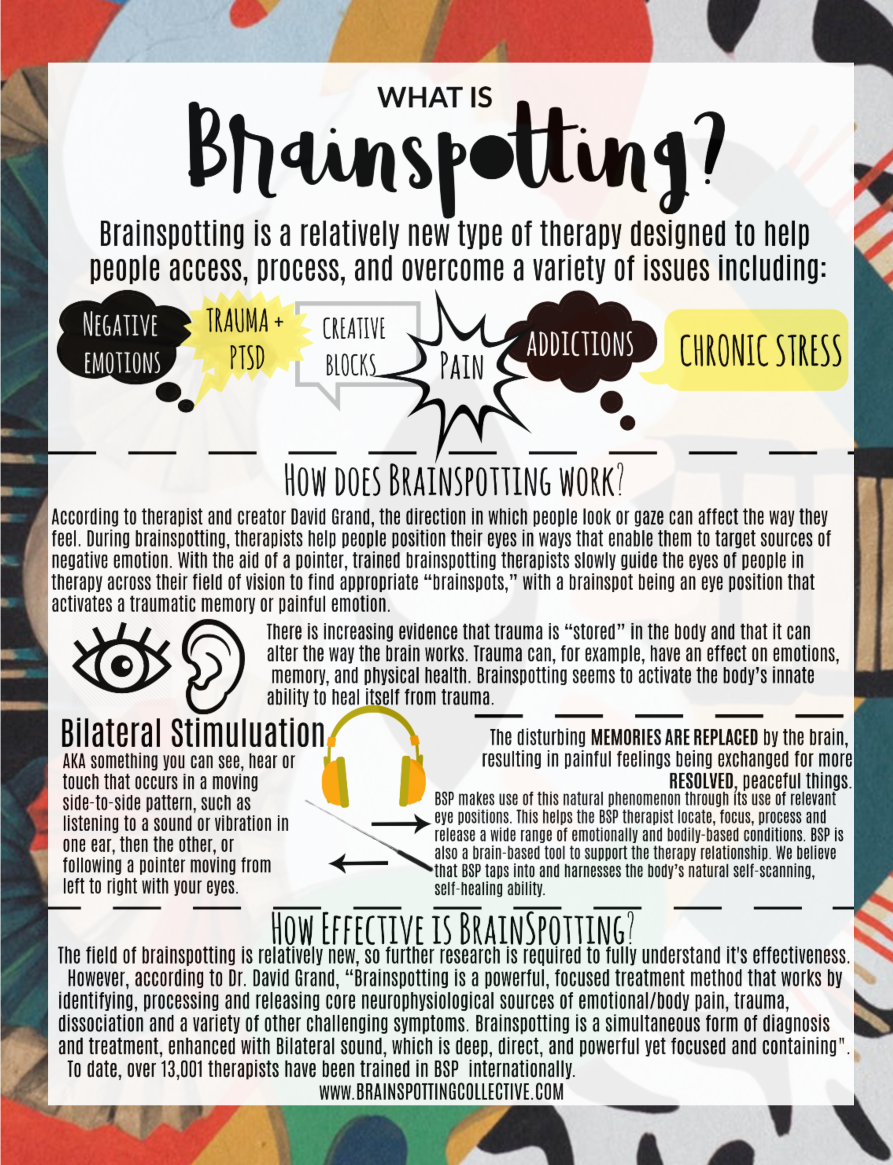 HOW DOES BRAINSPOTTING WORK?

According to therapist and creator David Grand, the direction in which people look or gaze can affect the way they feel. During brainspotting, therapists help people position their eyes in ways that enable them to target sources of negative emotion. With the aid of a pointer, trained brainspotting therapists slowly guide the eyes of people in therapy across their field of vision to find appropriate “brainspots,” with a brainspot being an eye position that activates a traumatic memory or painful emotion. Practitioners of the procedure believe it allows therapists to access emotions on a deeper level and target the physical effects of trauma.

There is increasing evidence that trauma is “stored” in the body and that it can alter the way the brain works. Trauma can, for example, have an effect on emotions, memory, and physical health. Brainspotting seems to activate the body’s innate ability to heal itself from trauma. 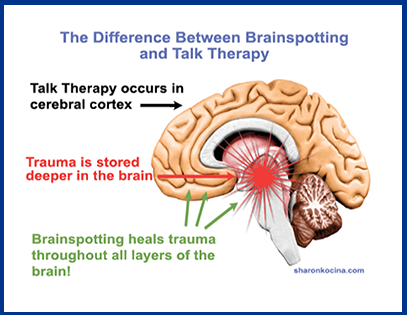 While a therapist may attempt to access both the physical and emotional “locations” of negative emotions, brainspotting therapists use something called “dual attunement,” a process through which the therapist simultaneously attunes to the therapeutic relationship as well as the brain-body response of the person in therapy. There is some evidence that brainspotting works primarily on the limbic system, a collection of brain structures that play a role in emotion, long-term memory, cognition, motivation, impulse control, and several other psychological factors that can affect well-being.

THE DEVELOPMENT OF BRAINSPOTTING?

Through his work applying somatic experiencing (SE) and eye movement desensitization and reprocessing therapy (EMDR), Grand eventually developed what he called Natural Flow EMDR, a technique that integrated these two types of therapy. Grand’s use of Natural Flow EMDR proved beneficial to some of those he was treating, and he used it as part of the trauma therapy he conducted with more than a hundred 9/11 survivors. He took this form of therapy further after one individual dealing with both physical and emotional symptoms of trauma experienced significant, rapid improvement following a session in which a locked eye position enabled a cathartic expression of memory and emotion. Grand eventually developed a formal training, and today more than 8,000 therapists are trained in the brainspotting approach, which is a fast-growing area in the field of psychology.

HOW EFFECTIVE IS BRAINSPOTTING?

Both brainspotting and EMDR therapies attempt to help those in therapy reprocess negative events and retrain emotional reactions. EMDR, the older of the two therapies, has been more intensively studied, but therapists are increasingly practicing brainspotting and reporting positive results.

Reported to help with a variety of psychological concerns, brainspotting is primarily used in trauma therapy and for the treatment of PTSD. It has also been shown to assist in injury recovery and help treat physical illness, inattention, stress, and low motivation. Some therapists believe psychological issues—such as anger, procrastination, and difficulty concentrating, among others—can be caused by trauma. Therefore, brainspotting might be a particularly effective form of therapy for those individuals who wish to address one or more of these concerns.

WHO CAN BENEFIT FROM BRAINSPOTTING?

Those who have experienced either physical or emotional trauma may benefit from brainspotting. This form of therapy has been shown to be an effective treatment option for those experiencing:

All forms of trauma

Though a large number of individuals report positive results from brainspotting treatments, this form of therapy is still relatively new, and further research will likely be of benefit. It is difficult to compare the efficacy of brainspotting to other approaches because few studies have been done on this particular approach. Brainspotting is still increasing in popularity among therapists and people seeking treatment, but it is still not as well-known as other treatment approaches.